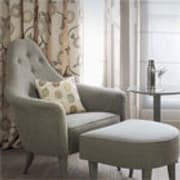 Many of the themes, such as flora and medallions, have been taken from Neisha’s early scarf designs, others, including moghul and speckle flower, from previously unpublished artwork, inspired by trips to India and Japan. 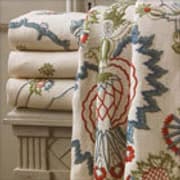 International interior designer, Alidad has recently designed his second fabric collection, The Medici, for renowned company, Chelsea Textiles. His first collection, The Bosphorus, was a considerable success for the company.
The designs for The Medici Collection can be used in a wide variety of settings, for curtains, fabric walling, occasional chairs and light upholstery. The designs’ versatility can create different moods. “If you want a window treatment to look light, you can use a plain fabric and attach it to a coordinating border. In the same way, you can have simple walling and create your own paneled room with the borders,” says Alidad.
Download Medici Collection PDF | See all the designs on Alidad.com

At long last! The Gräshoppa

The much sought after Chelsea Textiles Gräshoppa Lamp, inspired by Greta Magnusson Grossman, a 1950s Swedish designer, is now in stock. As soon as early prototypes were unveiled in 2009, they were seized upon by stylists and design journalists and photographed for many publications in Europe and the USA, creating an unprecedented demand. Initially made only to order the Gräshoppa Lamp is now available for immediate delivery.
The articulated metal bell shade, standing on a graceful angled stem, ending in three metal legs, is an iconic 50s reading lamp of spare elegance. Given added sophistication by a choice of any one of Chelsea Textiles' fourteen signature colours, from muted blues, greens and neutrals to rich rust and burgundy, it will enhance any space, from library to office to bedroom.
As with all Chelsea Textiles' new ventures, there is an emphasis on versatility in the colouring, making the Lamp a worthy complement to any interior, whether a traditional library or the most contemporary sitting room. 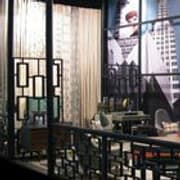 Chelsea Textiles brought New York chic to the Paris Maison & Objet, with a retro look down the avenues of Manhattan. The company presented collections of 50s-inspired furniture and fabrics in a ‘penthouse apartment’ high in the sky over NYC. As always, the colouring of Chelsea Textiles’ fabrics is subtle and natural, making them the ultimate complement to any interior, whether traditional or contemporary. This year’s Maison & Objet offering brought the company’s ethos of meticulous research, sourcing of authentic materials and unbeatable craftsmanship into the mid-twentieth century. Chelsea Textiles interpret vintage designs today to create antiques for the future.